Seasoned world jazz group based out of the San Francisco bay-area, Five Ten is changing the course of the global jazz music scene with their genre-bending soundscape. They have recently released an inspiring CD named ‘NEW WORLD’ showcases their incredible versatility under a single roof. The CD presents an oscillation of different rhythmic flavors intermingling with each other without a single collision. The group had agreed to give us some time off their busy schedule to do an interview with us. They have shared many unknown aspects of their latest CD and soundscape in general with our readers. 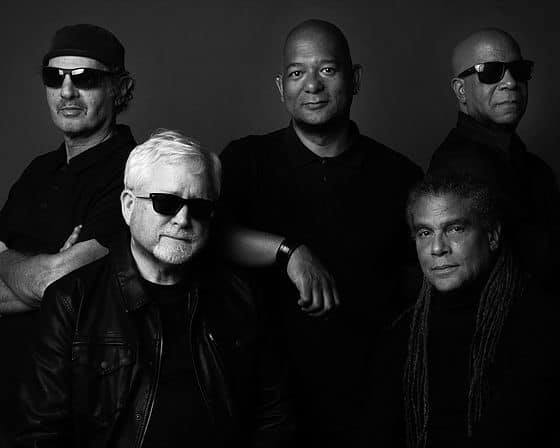 Congratulations Five Ten on the success of your new, incredible CD, ‘NEW WORLD’! And thank you for letting us do this interview.

Daily Music Roll: Five Ten, how are things going so far since the Covid 19 pandemic in 2021?

Five Ten: Things are beginning to look up for us.  We have all gotten our vaccinations and have once again begun to get together and rehearse the material for upcoming shows.  Show dates are still not available since music venues and festivals are the last to get the green light to reopen.  However, we will be ready when they call.  We’ve started working on some new material also…keeping it all moving forward.

Daily Music Roll: How has the pandemic affected your music and the group?

Five Ten: Well, we could not get together to rehearse during the shutdown which was really depressing.  Of course, this made us all pretty “rusty” on the material.   We all stayed in contact with each other to keep our spirits up.  I think we all appreciate the band and each other that much more since we’ve missed making music together for such a long time.  I don’t think any of us has ever in our collective careers not gigged for that long a period.  It was really strange.

Daily Music Roll: Let’s discuss your recent CD, ‘NEW WORLD’. It has become a huge success in the artistic jazz industry. How do you feel about it?

Five Ten: I feel that we are just at the beginning of our journey.  “New World” was the first recording with Billy and we have really gelled as a band with him on the drums.  It takes a while for everyone to learn each other’s style and ideas.  Then the work on how to make five individuals meld into one “sound”.  I feel that we have just gotten to this point and will really make the music blossom as we continue to perform.  “New World” is a great representation of our sound and the direction of the music we create.  We love performing these songs and look forward to opening them up even more as we share the energy of the live audience.  When one listens to the entire recording, they will hear a variety of musical influences which will transport their spirit and soul to wonderful places in this world (a welcome escape from the dystopian chaos of the daily news).

Daily Music Roll: Tell us more about the CD. How many songs does it have? What are the titles?

Nickles and Dimes – composed by Dennis

Mandinga – composed by Dennis and Marquinho

Daily Music Roll: Many international musicians have come together in the group. What kind of musical elements and influence were used in CD songs?

Five Ten: I think the musical elements that run through all of our music are Jazz and “East Bay Grease” (Funk and Soul) as the foundation.  Then we add some West African, Brazilian, Caribbean, Latin, and even a little Gospel to further flavor the stew.  We want to create a savory, spicy stew.

Daily Music Roll: What are the instruments used in the CD?

Five Ten: Billy and Dennis lay down the rhythmic and sonic foundation for the songs on drums and electric bass (and effects).  Steve and Jeff add the harmonic and melodic elements on electric keyboards and steel pans.  Marquinho adds the spice on a large array of percussion instruments and sound effects.  All capped off with occasional vocals from Marquinho, Dennis, and Jeff.

Daily Music Roll: How is the CD different from its contemporaries? What is so special about it?

Five Ten: This CD is different because it is an original creation from the five of us.  As we are creating our own unique sound and style, it cannot be like any of our contemporaries.

This is like “lightning in a bottle”.  The music we create is greater than the sum of the parts used to create it.  We have all known and played with each other for many years and when we perform, we blend the energy of the audience with the music to create a unique “VSOP” experience.  Each performance is live art which is ephemeral and especially shared with those present.

Daily Music Roll: How many members are there in the band? Tell us their names and how they contribute to the group?

Daily Music Roll: Which musicians have inspired you guys the most to create such universal instrumental beats?

Five Ten : Can’t speak for the rest of the guys as I think the list would be too long to print concisely.  I think as a band, we are inspired by groups like Return to Forever, Weather Report, Zawinul Syndicate, Yellowjackets, Herbie Hancock, and Headhunters………..

Daily Music Roll: What motivated you to put together as a group of such versatile musicians?

Five Ten: Looking to create a band with a unique sound and style.  Also wanted a band that can “cook”!  Kats that can be freed up in a musical situation and really go for it.

Daily Music Roll: Is the band operating independently or working under a production house/ record label?

Five Ten: We are operating independently with our own production house and label

Daily Music Roll: Does the group have any plan for tours or stage shows in the near future?

Five Ten: Currently waiting for the Covid restrictions to lift for musicians, venues, etc.  Then we would like to restart our touring and stage shows.  Have been fielding some inquiries lately, but no specific dates as promoters cannot really plan shows just yet.

Daily Music Roll: Are you guys working on anything new or planning to release any projects anytime soon?

Five Ten: Since the Covid lockdown, we have all spent time composing new material for the band.  We have just started rehearsing, so we have the material from “Cinco um Zero” and “New World” to tighten up.  We have also begun working on some of the new material.  We have our plates full with our music.  We want to keep pushing our music and ideas forward.  We usually perform our new material live before we decide to record it, so I’m sure folks will hear a lot of great music when they come to see us.