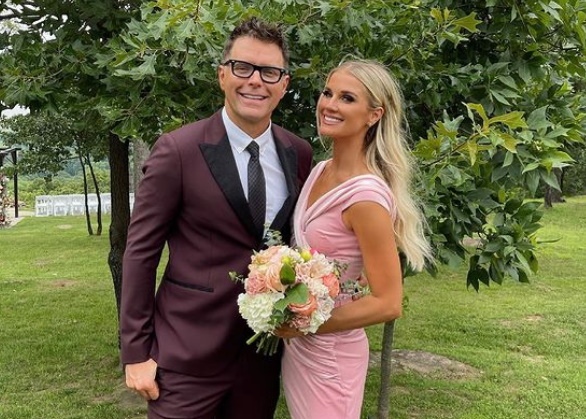 Bobby Bones is revealing details about his wedding after previously remaining silent about the couple’s preparations.

On July 18, the 41-year-old American Idol judge married Caitlin Parker, 29, in their Nashville home, and he shared photos and highlights on Instagram.

“Greatest night of my life,” Bobby captioned a carousel of images from the couple’s wedding day. “I adore you, @caitcparker.” Candace Cameron Bure was among those who commented in support, writing, “Many congratulations!!!!! Lovely pair.”

Bobby revealed on his Instagram Story that Grammy-winning combo Dan + Shay performed during the reception. According to People, country artists Dierks Bentley and Jake Owen attended the wedding, while former tennis player Andy Roddick served as a groomsman.

“so great to finally share our wedding w you guys,” Bobby wrote on his Story. “for safety reasons, we kept it under wraps as to when/where. It was at our house. And people have done some shady stuff recently to us. And we didn’t want our guests some who are well known to feel like they were unsafe.”

The radio presenter went on to say, “So we simply stayed silent till it was all done. Because you already know that people will jump through a wall to see a Dan+Shay performance [face with tears emojis]. Thank you for all of your kind words.”

Bobby announced their engagement on social media in October 2020, with a statement that said in part, “I’d been looking for the right one for a long time. And it [paid off]. I surprised her with a covert proposal in the backyard barn.”